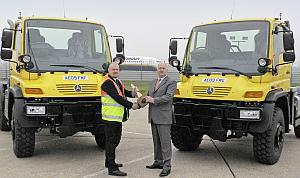 Long, hard winters tend be the exception in Great Britain. But on the rare occasions when they do occur, the unexpectedly heavy snow and widespread icy conditions – like those of February 2009 – represent a major headache for the people whose job it is to keep transport services operating. But not for David Charman, responsible for airside safety at London Gatwick Airport. He has had several Mercedes-Benz Unimog vehicles in his fleet for the past five years and was able to count on them to keep the airport moving during February's snow.

In the light of this experience, it was all the easier to make the decision to change over the entire winter-service fleet to Mercedes-Benz Unimog vehicles. The first two of another six Unimog U 500 vehicles have now been handed over to London Gatwick Airport by Mark Hopkins, Head of Unimog Sales at Mercedes-Benz UK. In addition to its Gatwick fleet, airport operator BAA also uses Unimog U 500 vehicles at Heathrow (ten vehicles), 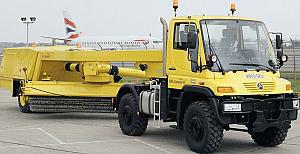 Edinburgh (eight) and Aberdeen (six vehicles) as flexible implement carriers for many different tasks.
"In the peak season we have up to 60 take-offs and landings an hour here at Gatwick and up to 1000 aircraft movements every day", says Charman. "If flights are delayed or, worse still, cancelled because of snow or ice on the runway, the costs incurred are considerable and, of course, our customers aren't happy. That's why it's important for us to have winter-service vehicles we know we can rely on one hundred percent".
Equipped with snowploughs and towed airport sweepers, the Unimog vehicles operate in a staggered echelon formation to free the runway from snow extremely rapidly so that aircraft movements can continue. David Charman adds: "Gatwick was the only airport in southern England to get through last winter without any closures, and our Unimog fleet deserves much of the credit." Other implements for use with the Unimog vehicles include a snow cutter, a sprayer unit for runway de-icing and a loading crane for infrastructure work.
Additional airport applications for the Unimog

The same implement-carrying capability which allows the U300 – U500 Unimog model series to provide professional winter-service cover with snowploughs, snow cutters and sweeper-blower units also means that these vehicles lend themselves to other airport duties, too. With a PTO shaft, power hydraulics and working gears, the Unimog can be used as a large-surface mower, for example, with a working width of some 6 metres. Regular mowing prevents birds from nesting on the airfield and so reduces the risk of bird strikes during take-off and landing.
Equipped with a front-mounted sweeper, the Unimog cleans aprons and taxiways. When this unit is removed, a permanent magnet beam can be attached to the front mounting plate in order to keep the runway and apron free of foreign metal objects, thereby contributing to aircraft safety. The Unimog's ability to operate year-round with different implements increases its cost-effectiveness and the flexibility of the vehicle fleet.