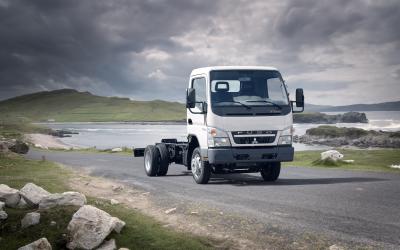 The Canter E-CELL concept vehicle to be presented by Fuso is suitable for everyday use and based on a Fuso Canter 3S13 with a 3.5 ton gross vehicle weight. The batteries are positioned in the chassis frame. The Fuso Canter E-CELL dispenses entirely with a combustion engine and thus produces zero emissions. The new concept vehicle from MFTBC features the latest technological developments and demonstrates that advanced technology will soon make electric mobility possible for trucks as well.
MFTBC makes environmental friendliness a top priority with all of its Fuso Canter light truck models. In addition to the new electric concept, the best-selling truck from Daimler Trucks is also produced as a hybrid version and with a conventional diesel engine. Nearly 1,000 of the Fuso Canter Eco Hybrids are already on the road in Japan, Australia, Hong Kong, Ireland, and in a large-scale testing program in London. Depending on the region in which the Canter Eco Hybrid with diesel-electric drive is used, it delivers fuel savings of between ten and 15 percent. The two-ton version of the Canter Hybrid has a fuel efficiency of 8.6 liters per 100 kilometers, currently the lowest fuel consumption of any truck in Japan.
And the current diesel Fuso Canter for the European market is also a top performer in terms of environmentally friendliness: In all of its weight, engine, and performance variants, the light truck is in compliance with the limits specified by the EEV (Enhanced Environmentally-friendly Vehicle) emissions standard, currently the most stringent voluntary norm.
Based in Kawasaki, Japan, Mitsubishi Fuso Truck and Bus Corporation (MFTBC) is one of Asia’s leading commercial vehicle manufacturers. In 2009, the company sold a total of about 99,500 vehicles, including light, medium and heavy-duty trucks and buses. Daimler AG owns 85 percent of MFTBC shares. MFTBC is an integral part of the Daimler Trucks division of Daimler AG.