The new generation of Mercedes-Benz Vito 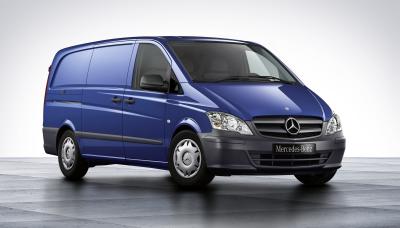 The new generation of Mercedes-Benz Vito is a benchmark among vans. Its new drive system is extremely efficient and delivers top performance. The optionally available BlueEFFICIENCY technology offers the utmost in eco-friendly and economical driving. The Vito is also a star in terms of its improved payload and robust nature. Significantly reduced noise levels as well as the new suspension and an upgraded cockpit make handling and controls much simpler whilst also improving the vehicle's ergonomics.
Drive system: extremely economical and clean, optional BlueEFFICIENCY technology
Economic running thanks to low fuel consumption, low emissions thanks to emissions level Euro 5 – the new drive system in the Mercedes-Benz Vito demonstrates just what vans fitted with the latest technology are capable of. CO2 emissions and fuel consumption have been reduced by up to 15 percent compared with the previous models, giving record figures.

In conjunction with the sophisticated engineering of the current generation of four and six-cylinder Mercedes-Benz engines, this is achieved through BlueEFFICIENCY technology. This encompasses on-demand activation of major assemblies, an ECO start/stop system and optimised low-resistance tyres. BlueEFFICIENCY technology is available as an option on the Vito. The new six-speed transmission, standard in combination with all four-cylinder diesel engines, also helps reduce emissions and fuel consumption. Its broad gear ratio spread allows excellent traction at low speeds, while at higher speeds revs and thus fuel consumption are reduced. The engine output of the Vito ranges to suit its spectrum of applications from 70 kW (95 hp) to 190 kW (258 hp).
Robust and resilient: payload capacity increased, suspension renewed
The character of the Mercedes-Benz Vito as a particularly robust and very functionally designed van is underlined by the new, sturdy bumpers. The Vito's practicality in rough, everyday situations is further emphasised by a payload that has been increased, in some models quite significantly, and by a completely retuned chassis and suspension system. Both front and rear axles have been revised in every detail and specially tuned to match each specific model. Different suspension configurations are used for the high-payload panel van and the more comfort-oriented crewbus variant.
Improved comfort; noise levels considerably reduced
Not that comfort is by any means forgotten in the Mercedes-Benz Vito. The interior of the new-generation model offers simpler controls and a new colour concept. The quality feel of the passenger compartment has been improved quite noticeably and, in this context, noise levels could also be considerably reduced.
Visually, the new generation of Mercedes-Benz Vito can be identified by its new-style headlamps. The bumpers have also been modified.