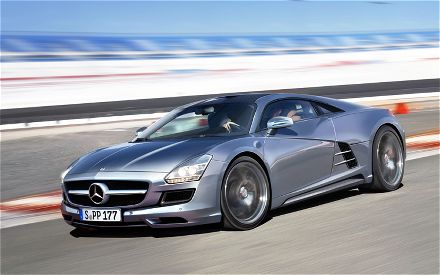 We've reported recently that Mercedes-AMG was working on a smaller, cheaper Mercedes SLS spin-off called the SLV, which would share the Gullwing's frontengine layout. That plan is now on the back burner. Mercedes is still interested in a derivative of its new halo model, but that prospect is currently being referred to internally as SLM. The M stands for mid-engine, as captured in the proportions of our spy illustration.

The change in course is primarily due to concerns about overlap within the Mercedes lineup. "Our friends in corporate rightly pointed out that a front-engine sports car would have been too close to the SL, which is an important cash cow for the brand," explains our source at AMG.

The performance division considered going in the opposite direction and building a "super SLS"-something wilder than the defunct SLR McLaren-but soon realized that such a concept wouldn't fit the times. AMG has found that even its elite customer base expects more environmental and social responsibility going forward, so the SLM will emphasize lightness and efficiency. But why go with a mid-engine configuration, which will basically require AMG to start from scratch rather than adapting Gullwing components?

"A mid-engine car is the best way to avoid cannibalizing sales-and to challenge rivals like the Audi R8 and the upcoming production version of the BMW Vision EfficientDynamics coupe," our source answers.

In the early stages of the SLM's gestation-kicked off under the leadership of Volker Mornhinweg before he left AMG to run the Mercedes van division-engineers experimented with a twin-turbo four-cylinder, but that option was dropped because it would have been hard to find a profitable price point. Another alternative was simply to replace the SLS with a mid-engine coupe powered by the latest small-displacement V-8. Again, the idea was nixed because it didn't provide enough incremental business. The most likely scenario now is a 350-hp, 3.5-liter twin-turbo V-6 paired with two electric motors positioned in front of the driver. To maximize synergies, the front axle, elements of the battery pack, and the electronics platform will be adopted from the electric-drive SLS, which is due in 2012. The rear suspension, complete with the seven-speed transaxle, is another significant carryover item. Expect AMG to adapt the aluminum spaceframe it developed for the SLS, although the firewall will obviously move rearward.

One aspect of the SLS that definitely won't trickle down is its distinctive appearance. "We are not going to offer a downsized Gullwing. Such a car would dilute the attraction of the SLS, and it would demonstrate a lack of imagination," says a team member on the project. AMG has also ruled out a hardtop convertible. "It's not sufficiently hard-core and sporty."

That leaves us with the following alternatives: a coupe, a roadster, and a hatchback. According to the AMG grapevine, a coupe with so-called "heron-wing" doors (they swing out and then pivot up at a 45-degree angle) is the likely starting point. The second SLM model will probably be a speedster with a cut-down windshield and a basic, manually operated canvas top. Dimensionally, the SLM is smaller than a Ferrari 458 Italia. The time frame, volume, and financial calculations for the most radical modern Benz are still iffy. The year 2015 looks like a realistic target, and if the company can sell at least 7500 units annually, the asking price should come down to approximately $165,000. That's more than most SLs but about twenty grand less than a base Gullwing.